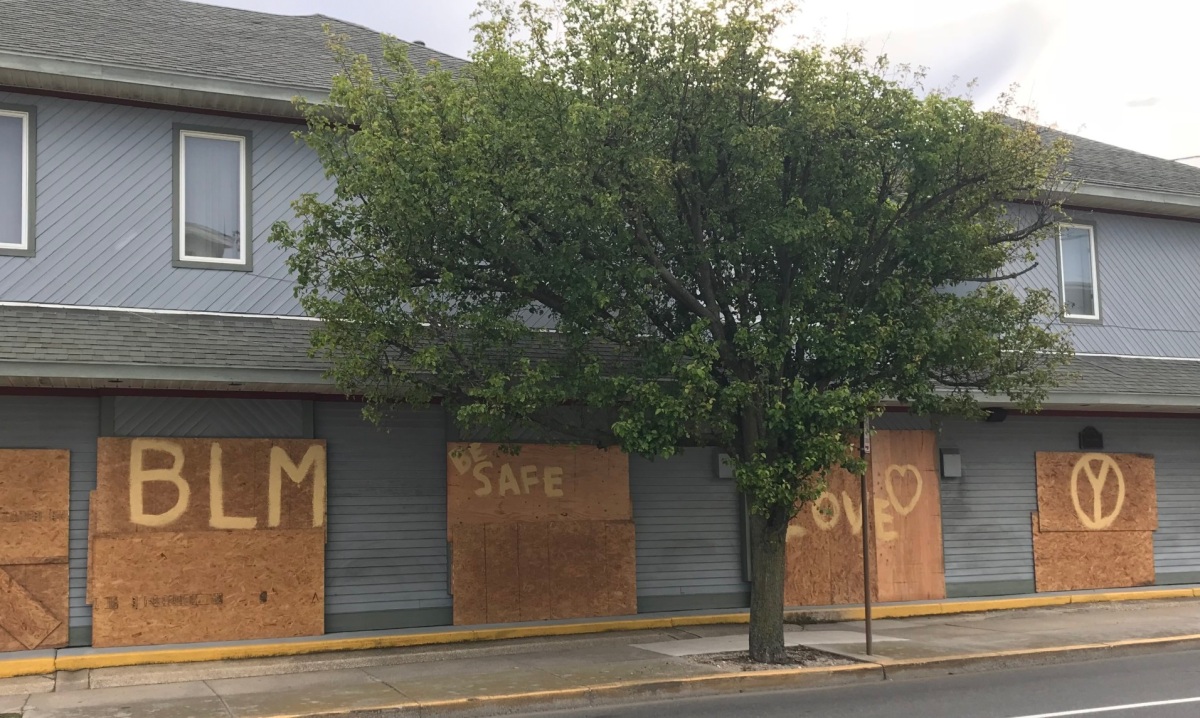 The rapidness with which our once beloved country seems to be disintegrating before our eyes is truly astounding. Perhaps we’re all finally losing our heads due to the COVID-19 lockdowns. Why not go out and loot the local Target and burn small businesses to the ground in the name of racial justice?

I’m sure the lockdowns are fanning the flames, as it were, but something else must be going on too. It’s time to drop the pretense that this is about the sad death of George Floyd any longer. A friend asked: Isn’t it possible to be in favor of protesting this man’s death from brutal police action while at the same time being against the rioting and destruction? Why do all the bien pensants in media and politics either approve of the utter devastation of American cities, because they deem the rioters’ cause to be legitimate, or qualify every condemnation of violence with a “yes, but…”?

A poignant book called “Why Terrorism Works”, written by Alan Dershowitz a year after 9/11, came to mind recently. In it, Dershowitz argued that terrorism started paying off in the 1960s and 70s because it led gullible Westerners to assume that if Palestinians were ready to give their lives for the cause, the latter must be truly desperate in their state of oppression. Rather than uniformly condemning Palestinian terrorism, a good chunk of the Western intelligentsia, already steeped in various forms of Marxist claptrap, actively sympathized with its cause. This, in turn, was perceived by the PLO and later Hamas as a reward for their actions and hence further fueled the terrorism, Dershowitz wrote.

A similar dynamic is at work here. Every day at 1PM, when these thugs wake up hungover from the previous night’s destructive binge, they turn on CNN and find the usual talking heads yapping away about how legitimate anger within the black community lies at the roots of these riots. All of a sudden, all the right-thinking people are discussing police brutality, racism and economic injustice. Would it be a stretch of the imagination to assume the perpetrators of these crimes are high-fiving each other in glee over the fact they got their mission accomplished while guilt-ridden middle-class whites are still sobbing about their own racism?

Vermont Governor Phil Scott (a Republican, mind you) stated on social media yesterday that “while we’re watching the response across the country, it’s important to reflect on a quote from Dr. Martin Luther King, who said, ‘A riot is the language of the unheard.’ They simply don’t know what else to do.” With all due respect, Governor, but how about a peaceful protest instead? Not that the casual observer would learn from reading your statement that businesses are being looted and burned down, by the way, because it doesn’t make any mention of that horrible fact.

So marinated are we in this victimhood narrative that few people are even questioning its premises, much less dive into its ideological roots. It is clear, however, that the death of George Floyd is a mere pretext, perhaps not for all participants, but certainly for their BLM and Antifa organizers. What we’re witnessing is decades of postmodernism and Cultural Marxism coming to full fruition. For too long, we have educated our young to question the legitimacy of the very foundations of Western civilization, and now we’re left with an army of intellectual illiterates whose only motivator is a nihilist desire to burn down the house.

The core of the postmodernist ideology they were indoctrinated with in college is that any claim to truth, as well as value systems, are inherently subjective and a product of political, historical, and cultural circumstances. This means that if we Westerners came up with this splendid idea of ordered liberty and representative democracy, well, that’s just the result of a bunch of old white men exercising their white privilege. It cannot be argued that said system is inherently superior to any other, including, presumably, Nazi Germany or the Soviet Union.

The next step is to wield any inevitable displays of inequality in our societies as a weapon against ‘the system’ in order to sow resentment among the not-so-well-off masses. The classic Marxist dichotomy of ‘capitalist versus worker’ became irrelevant over time, as middle-class wealth grew after World War II while the Soviet Union resorted to ever more repression to squelch dissent. Therefore, Marx’s twentieth-century disciples made a lateral step: It wasn’t necessarily the problem of the rich exploiting the poor which needed correcting, but whites exploiting minorities, men exploiting women, and heterosexuals exploiting gays and transgenders.

Can you deduce from the above list which group emerges at the top of the hierarchy? Yes, it’s Straight Christian White Men, who are at this point deemed to be fully deserving of all the scorn we can hurl at them.

And boy, is there a lot of exploiting that needs correcting. Once one’s head is locked up in the narrative that every person of color, every woman, and every homosexual is in one way or another a victim of heterosexual white male oppression, one will start to see examples anywhere and everywhere. A wage gap here, a police killing there, a gay bashing or two — anything will do. Since these injustices haven’t arisen despite our institutions and political and economic freedom but because of them, our very societal foundations are fair game for criticism — and far worse.

For the Antifa folks as well as the more radical elements within the Black Lives Matter movement, this means it’s A-OK to burn a church to the ground, that building being part of an institution which has actively enabled the oppression. The same goes for our democratic institutions, law enforcement, and symbols of free market capitalism (in other words, businesses of any size). When regular folks lament the mom ‘n pops clothing store being looted overnight, what they don’t understand is that, to the radical Left, that place was part of ‘the system’ and therefore part of the problem. And a legitimate target of their rage.

This is what’s going on in this country at the moment. It would be sad and despicable even if we weren’t in the waxing days of the most devastating economic crisis since 1929 already. But a reality it is nonetheless. One can only hope there are enough decent Americans left to prevent our slide into Weimar territory.